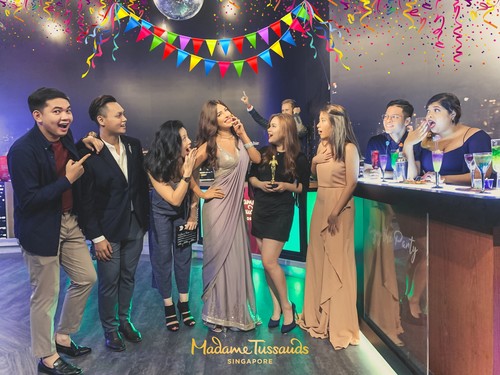 The Vogue cover star has been working closely with Madame Tussauds' team on the epic four-figure project since 2018, beginning with a private sitting at Priyanka's New York City apartment. Fans have been waiting to see the hotly-anticipated Asia arrival since the first figure was revealed earlier this year in Priyanka's adopted hometown of New York. Today, Madame Tussauds Singapore joins its sister sites in London and Sydney in unveiling their figures to long-awaiting fans.

Madame Tussauds Singapore is the first station of her touring figure in Asia. After a limited period of time, her figure will be touring in Bangkok and Hong Kong next.

A star of over 50 films whose acting prowess has taken Hollywood by storm, Priyanka is a passionate advocate for women's issues and equality and a UNICEF Goodwill Ambassador.

"Working with Madame Tussauds' team has been so much fun. I'm so thrilled to have a touring figure meeting my fans in Asia too -- Singapore, I am coming now! Take as much selfies as you can with me and I am looking forward to seeing them all on social media." said Priyanka Chopra Jonas.

Priyanka's figure is styled to match her iconic 'Desi Girl' appearance from the movie Dostana. She is surely going to make a gorgeous impression at the attraction's A-list Party area, where guests can also find other international superstars such as Johnny Depp, Leonardo DiCaprio, Nicole Kidman and many more.

Alex Ward, General Manager at Madame Tussauds Singapore said, "We are so excited to be the first Madame Tussauds in Asia to receive Priyanka's figure. Since last year, we have received overwhelming requests from our guests and Priyanka's fans to have her figure here, in Singapore. She is an obvious choice to add to our A-list line-up."

Madame Tussauds is the ultimate celebrity experience and the world's best known and most popular wax attraction. There are currently 21 Madame Tussauds attractions around the world. Each of the attractions is unique and tailored to the host city and visitor demographic to feature both local as well as international figures. These attractions are continually endorsed by celebrities, sports stars, royalty and global politicians.

Founded in London in 1835, Madame Tussauds' amazing wax figures are so high quality and so lifelike that even the celebrities themselves do a double take when they see them -- and all in stunning interactive themed sets designed to excite, amaze, and surprise, including some with unique animated features! And, with no bars, ropes or barriers around the figures, visitors will have no problem believing that they really are standing beside their heroes and the photographs taken with favourite stars will be a special memory for ever.

The result of 200 years of expertise and painstaking research every figure takes Madame Tussauds' gifted sculptors a minimum of three months to make, and costs more than $300K (Singapore dollars). Most contemporary figures are also produced following sittings with the celebrities themselves and are the result of hundreds of separate measurements, hours matching skin tone, eye and hair colour -- with every individual hair inserted separately. Celebrities and film studio wardrobe departments often supply clothing for their figures, or designers will reproduce significant or iconic outfits as exact replicas, only for Madame Tussauds. Inclusion in one of Madame Tussauds attractions around the world is seen as a huge honour and recognition of an individual's contribution, status and achievement.

Merlin Entertainments plc is a global leader in location-based, family entertainment. As Europe's Number 1 and the world's second-largest visitor attraction operator, Merlin now operates over 130 attractions, 19 hotels and 6 holiday villages in 25 countries and across 4 continents. Merlin's purpose is to deliver memorable experiences to its 67 million guests around the world, through its iconic brands and multiple attraction formats, and the commitment and passion of its c.28,000 employees (peak season).